One of the greatest natural spectacles on Earth, happens just off the Gold Coast every year.

The distance of the great Humpback Whale migration is second only to the tiny artic Tern’s. A tiny 113g bird that follows a zigzagging route from Greenland to Antarctica!

Humpback Whales, which are found in all oceans of the world, migrate annually from their summer feeding grounds in the polar regions, to their winter breeding grounds near the tropics. The Southern Hemisphere Humpbacks make an annual migration of approx. 11,000km return. We here on the East Australian Coastline, are able to witness this awe inspiring migration between the months of May – November as the peak whale watching season on the Gold Coast.

The first Whales we usually see heading North are the females traveling with last year’s calf, known as a yearling. Following them are the Juveniles of both sexes, the sub-adults are next & then the fully-grown adults. The pregnant female Whales are the last to leave Antarctic. On their return trip it’s slightly different, but we can share more about that when you’re onboard 😉

Best time for whale watching tours on the Gold Coast

Recently I’ve had a lot of people asking, “when is the best time of year to swim with the humpbacks??”. To answer, it is actually right now!

We’re right in the middle of a beautiful moment which occurs during the Southbound part of the Whales annual migration. On this stretch of the coastline, the Whales display an incredibly inquisitive switch in behaviour known as “a mugging”. The Whales often stop swimming, turn and swim straight over to the boat to check us out.  Some pods may stay watching us onboard for up to an hour. Some may even display their marine ballet talents to our delight! 🤓

An increase in this behaviour always takes place during late August – September, however, it can happen at any time during the whale watching (migration) season from May to November. 😀 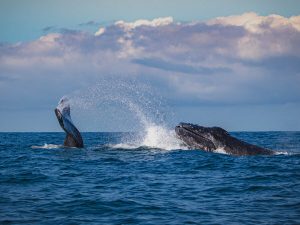 The Mystery of Whales

There will always be an element of mystery about Whales. They spend more than 70% of their lives under the water (sometimes at depths of 100/200m). It’s natural that they inspire enormous curiosity and awe when they do appear with us at the surface!

Knowing a few statistics about Humpback Whales will not prepare one for the full surprise and amazement of seeing a 16m, 40 tonne mammal completely lift itself out of the water, twirl, wave & then crash back into the sea sending spray 10m+ into the air!

When a Whale surfaces, the simple act of exhaling results in a ‘blow’ of spray and the air shoots up to four metres high. In doing so, it empties 90% of the expired air in its lungs in less than a second. The Whale’s lung capacity is approx. equivalent to the volume of a small car. When they breathe in and dive under the surface, they can stay submerged for up to 30-40min. Generally, here off the Gold Coast, they submerge for between 3-10 minutes. We call this their ‘down time’.

There is so much information about Whales that we are excited to share with you, however, we can’t fit it all into this one news article! Onboard with us here at Cooly Eco Adventures, you’ll learn much more yet about the magic of the Whales & how together we can continue to protect them & our Ocean for future generations. 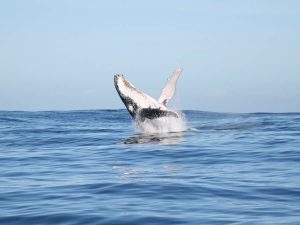 Join us for an experience of whale watching here on the Gold Coast you won’t soon forget! 🐋🙌🏼

Swim with Whales on the Gold Coast. Exclusive to Cooly Eco Adventures